Okay I don’t know why I waited so long to update you guys on things because now I have no idea where to even begin or what to tell you about.  I think I was trying to get all my emotions under control so that I didn’t come back here and just write about how mopey I am, but I am still feeling full of mope.  Perhaps reminiscing about things that have occurred in the past 8 days will help.  Or maybe this will end with a wet keyboard and ruined mascara yet again!  Only one way to find out!

Checking my records here, it appears I never told you about what I wore last Friday, which means I took an entire week off of blogging, which means I don’t even remember what I usually write here.  Only one person has asked me so far what my new job will mean for the blog (Hi Deirdre!  I love you!), and near as I can figure I’m going to have to either become some other kind of hog (“nudehog” doesn’t quite have the same ring to it, nor is that anything anyone wants to learn more about), or blog way less frequently.  I was thinking 3 times per week, but I don’t know if I’ll even get dressed that many times a week, nor do I have anyone in the vicinity who can take my photos.  I keep hoping Skeeter or Jojo will offer, but no dice.  This is probably why people have kids, huh?

To pick up where we left off, here is what I wore a week ago!  It is a Retrolicious dress that I got on Facebook, and the print is a bunch of lil mushrooms.  I am not a fan of mushrooms as far as food goes, but I do think they’re precious. Retrolicious is one of my absolute favorite brands of all time even thought their clothes are sometimes cut oddly and they seem to not love fat people very much.  They keep putting out adorable dresses and not even making them above size XL, or if they do make them, they make it difficult to find who exactly is selling them.  If you clicked through to the website (no pressure!  I am about to spoil that shit anyway so NBD) then you saw that they sell items on their own site, but the plus size section is a lot smaller (counterintuitive!) than the straight-sized availability.  I find this irritating, but it is also a bit of a relief because if they made every single thing in a 3x, I would never be able to afford food.  And without food, I’d no longer need a 3x.  And then I’d be stuck with a bunch of damn dresses I can’t even wear!  The shoes are Born, and they’re so comfortable I thought I’d wear them all the time but I’ve had them like six moths and this is their debut.

In addition to a photo of me, and the material, I am also including some street art that’s near Maegan’s house, because I love the little (er, totally regular-sized!) detail that someone else added later. 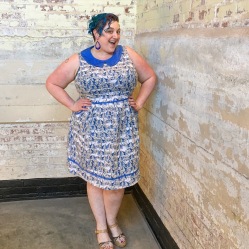 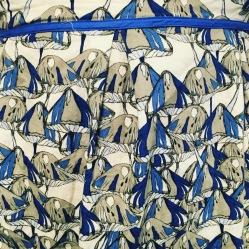 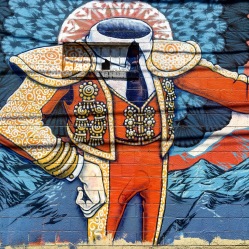 These pants are really painted on!

Last Saturday night, some friends of ours hosted a backyard comedy show (hi Jaye & Greg! I do not know if you read this but thanks for inviting us!).  I have mixed feelings about standup comedy (something about people trying really hard to make me laugh makes me want to really not laugh because I am a stubborn asshole, so a standup comedian has to be like 5x funnier than a normal human being who is just being regular and not up on a stage getting paid to make me think they’re funny), and about leaving the house (sometimes it is fun but it is extremely hot outside and there is a lot of good shit on Netflix right now), so we were late arriving and only caught the final two acts.  They were both amazing, but I missed the first dude’s name.  I remember Greg Behrens‘s name because I have seen him perform before, and also because I took a photo of him and it seemed like the appropriate thing to do would be to know the name of a person I took a photo of.   In this case, leaving the house was the correct decision, but I reserve the right to learn nothing from that outcome.

I wore a fruity dress from ModCloth, some Swedish Hasbeens and a belt (both from Amazon), along with some earrings from Cato.  I was still too hot, even with no sleeves or pants.  Also I want to tell you something which is that I love everything about fruit except for eating it.  I think it’s so tempting and beautiful and smells delicious and looks like it would be perfect, but every time I eat an actual fruit I land on the emotional scale somewhere near severely disappointed, approaching extremely offended.  I thought maybe I was some trash-mouthed plebe who just needs a quart of sugar in every serving of food, but the other day I had a Krispy Kreme doughnut and threw half away because it was so sickeningly sweet, so clearly the answer is that fruit is disgusting and the rest of you are full of shit. 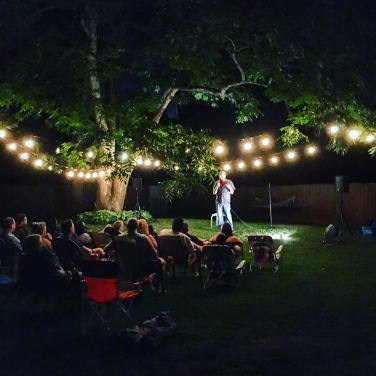 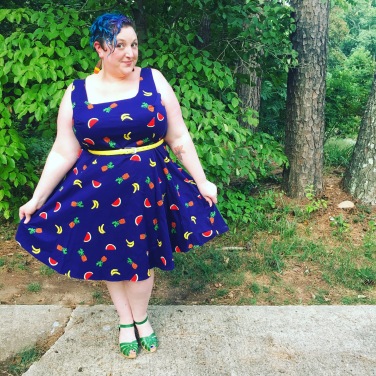 On July 4th, Zach and I were craving burgs and didn’t feel like firing up our own grill, so we went over to Farm Burger. I used to say they had the best burgs in town, but I hadn’t visited in a while.  I recalled them being incredibly overpriced, but the last time I ate there I was much poorer so my perspective was different.  We ordered two burgs with plentiful toppings, a tea, a beer, and some rings & fries, and the total was about $30.  Not a cheap meal, but certainly not a bank-breaker either.  I went with pimento cheese, lettuce, jalapenos, mayo, roasted garlic, bacon, pickles, and onions.  I forget what Zach ordered but he generally picks a simpler burger, whereas I want an entire produce section’s worth of toppings, along with part of the dairy and breakfast meat cases.

My burg was requested medium, and it was plenty red when I got it. I enjoy a rarer burger, but if you’re squeamish you may want to ask for well-done.  Their beef is locally-sourced, so the sketch level is pretty low.  It’s always well-seasoned and has great texture.  All of my additional ingredients were clearly high quality, and they all worked well with the grass-fed beef.  I wish they’d use shredded lettuce instead of leaf, because it turns the sandwich into a slippery disaster.  FB could also probably stand to use a more substantial bun, or a thinner patty. More toppings=less structural integrity=burger disintegration.  I had fond memories of their onion rings, but these were too thickly battered, resulting in mouthfuls of doughy breading, and not much crisp.  Their hand-cut fries are tasty, though I prefer the “FB” version–with garlic and parm.

While I love Farm Burger’s food, I am not enamored of their space.  It was uncomfortably warm inside when we were there, which made a big juicy burger seem a little less tantalizing.  They have a few 2-top tables, but those were all occupied during our visit so we had to sit at a goddamn communal table.  Theoretically I don’t mind sharing a table with a total stranger, but I personally don’t see any need to share a bench, and I hate that they did this instead of using chairs.  Any time anyone else at the table wants to get up, the whole bench needs to be moved.  It’s also excessively hard to stand up and walk away from a long-ass bench while you’re in heels and a dress.  I think I unintentionally flashed the entire kitchen staff at least three times.  The 4th time was just for fun.

I was off work Monday AND Tuesday, so Wednesday was my only day of work all week.  It was a horribly painful day, but also full of sweetness and love and hugs. There were torrential downpours all day, and on my drive home I saw a rainbow.  I kept trying to make a metaphor about my tears being rain, but the kindness of my friends being the sunshine and something else sappy but I couldn’t word it right so I just told you all of that instead of being concise or insightful.

When I showed up in the morning, my coworkfriend Tamera had left this cheeseburger card on my desk, along with my favorite drank from West Elm. Tam said she just asked the barista, “You know Alison’s drink?” and the answer was yes, and the drink was perfect and delicious.  Now that I’ll be at home every day, I’ll work on perfecting my own rosemary molasses syrup so that I can replicate this without losing the $5 every day.  My buddy Matt presented me with this perfect Krystan Saint Cat  ice cream pin, which was eerily on point because I was wearing an ice cream-themed dress (from ModCloth, of course)!

Tomeka collected signatures on a card for me, and she got so many that she had to supplement the space on the card with additional post-it notes.  Christy gave me a Sephora gift card and a double-mirror compact.  Ary made me her deliciously beautiful dragon cake.  Then, at the end of the day, Perfumanda, Maegan, Amy and the rest of the department totally surprised me with even more cake, and ice cream, and well wishes in one of the meeting rooms in the office.  I was sobbing too much to take any photos, so please believe me that this all happened and I am definitely not lying about people liking me.  When I got home that night, I went through all the gifts and kind words and just cried my entire eyeballs out of my skull with the floods of tears.  I know I made the right decision because this will enable me to move to Washington but goddddddd giving up a good thing feels utterly awful for the time being.  I’m trying to look ahead and get excited about the impending move and that helps a little at first but then turns into a terrifying to-do list, most of which I probably haven’t even thought of yet omggggg.  Also I have been so morose that I forgot I should be excited about starting a new job on Monday. 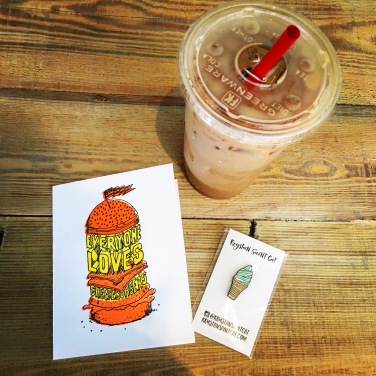 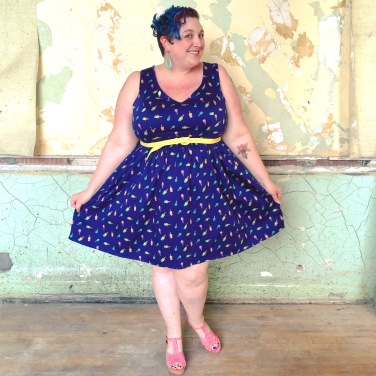 Okay so I honestly don’t know when I’ll have more to talk to you about. I hope on Monday, but I don’t want to make a promise and end up letting you down.  You’re my favorite, and I would never hurt you.

Back in the Day